When I asked Twitter - as you do - where to eat in Dublin I was inundated with replies. There is obviously no shortage of good places to eat in the world’s favourite Irish city.

But Delahunt, recommended by my friend Trish Deseine who is currently writing a guide to Irish food, sounded particularly intriguing. A stunning interior, a sophisticated take on moder Irish food and new to the Dublin dining scene which is always a lure for us gastronomic thrillophiles.

And goodness me the building is beautiful. A former offie apparently though it looks more as is if it might have been a pharmacy with a large snug at the back that looks like the dispensary. All imported, I’m guessing, judging from the ‘before’ pictures on Lovin Dublin’s blog. 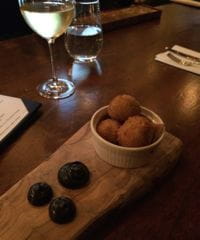 As we managed to arrive an hour early (my OH having forgotten what time he’d booked) we sat at the bar for a bit until our table became free. A good move actually as we managed to squeeze in a couple of snacks - some deep fried strips of pig’s ear with raisin mustard and curried cod croquettes with ‘taramasalata’. I put that in inverted commas because the tarama appeared to take the form of 3 black blobs and the croquettes didn’t appear to be curried come to that. Delicious though. They can certainly fry which is quite an art as any Spanish chef will tell you.

You don’t really need a starter if you’ve done the snacks but we ordered one anyway in the interests of research, obviously. Some delicately smoked salmon (smoked in house, apparently) with some insanely good dark, sweet, malty Guinness bread and a lovely fresh apple and Bellingham blue cheese salad with chicory and walnut: a well tried and tested combination but perfectly executed. I’d have gone for the tempting sounding braised oxtail with bone marrow and crispy snails if I hadn’t been having a meaty main. 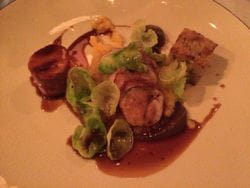 Actually the mains were the highlight of the meal which is unusual. Pheasant had been rolled into a ballotine and served with *sprout shells* (a scattering of individual sprout leaves), a small slab of white pudding and homemade brown sauce. Michelin standard. My OH had a simpler but equally delicious dish of superbly fresh roast hake with crushed Jerusalem artichoke, raisin (the chef obviously likes raisins) and verjus. The accompanying champ, made with floury potatoes and topped with fine slivers of spring onion was one of the best I’ve had.

We had no room for dessert but that didn’t deter us from ordering one and were glad not to have missed a blood orange tart which had the gorgeous wobbly consistency of a creme brulée It would have been lovely with a sweet wine like a Sauternes if we’d thought to order one.

If I’m quibbling the wine list could have been better for this quality of food - both my falernia and spätburgunder tasted a little lean, in the latter case simply too young. A few natural wines wouldn't have gone amiss. And the music - an insistent drum and bass - was curiously inappropriate, better suited to one of the cheaper, more casual restaurants that line Camden street. But loud, slightly naff music seems to be a feature of the Dublin dining scene. Blame The Commitments.

Delahunt is lovely though and should definitely be on your hitlist if you’re visiting the city. Just make sure you book well in advance. It’s hawt.

I went to Delahunt last week and really enjoyed it. Food was lovely and service at the bar was excellent (a rather rare feat in Dublin). Definitely one of (if not) the best new restaurant in town. The cost of dinner is fairly priced considering the overall quality(service,food,ambiance...), ever heard of Sabor Brazil ? There are a lot of mediocre restaurants around town with similar prices.
Delahunt IS worth it.