If you’re the kind of sad, unreconstructed Francophile (like me) who thinks French food has gone to the dogs head not for Eurostar but the newly opened Brasserie Zédel in London’s West End. Housed in the late and not-much-lamented Atlantic Bar and Grill near Piccadilly Circus, it occupies a huge subterranean space which has been decked out at eye-watering expense in full fin de siècle style.

The guys who have deep enough pockets and the sheer chutzpah to pull off this feat are Chris Corbin and Jeremy King, founders of the Caprice and the Ivy and owners of the equally glam and celebrity-frequented Wolseley and Delaunay.

So reasonable are the prices - oeufs dur mayonnaise for £2.75! - that we assumed the portions must be minuscule and ordered way too much in the way of hors d’oeuvres - an heirloom tomato salad with shallots (£2.95), superbly garlicky paté with chopped jelly and cornichons (£5.75) and some nicely tangy céleri remoulade (£2.95) almost certainly made in house rather than bought-in as it would have been in Paris. Freshly cut baguette came from what looked like a boulangerie in the corner - a slightly kitsch but effective touch. 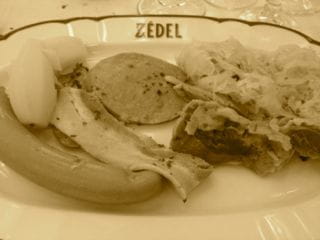 My carnivorous colleague and I decided to tackle the choucroute Zédel ‘pour deux’ (at £14.95 per person) which could easily have served six and which was presented with much ceremony by one of the servers - the choucroutier? - who dismembered the ham hock for us and reassembled it tastefully on top of our platter. He assured us we had enough boiled potatoes but given the amount of meat and cabbage (which was perfectly seasoned with a nice nip of cloves) I’d order a few extra as a side. (Since when did you see plain pommes vapeur on a menu, let alone at £2.50?)

Our 250ml pichet of fruity Alsace riesling (2010 vintage but unnamed) was the perfect accompaniment and not unreasonable at £12.10 though the wine list is almost certainly where they make their money.

Despite being unable to finish our choucroute we plunged into the puds - almost literally so in the case of a ‘bol de mousse au chocolat’ (£5.25) which came in what looked like a small mixing bowl. 'People like to share' we were told. The eclair ‘Paris-Brest’ - a choux puff filled with praline flavoured cream was perhaps the only dish that didn’t hit the mark - quite tasty but overchilled and a shade heavy. But who's complaining at £2.75?

The only other criticism (and I’m struggling) is that they didn't spell out that our Lillet aperitif was rouge rather than blanc (we should have asked but they still replaced it) and that they brought the starters and wine minutes after, leaving us little time to sip them. But they knocked one off the bill to compensate. 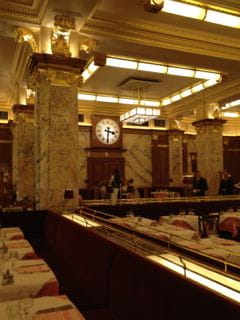 There’s a cheap prix fixe lunch for £8.75 for 2 courses and £11.75 for three and a plat du jour for £12.75 which I didn’t go for because I’m not mad about blanquette de veau which was on offer that day. Other specials like poitrine de porc farcie and lapin à la moutarde look more tempting.

If you’re not in the mood for food or it's too early to face choucroute there’s a little cafe upstairs where you can drink coffee and read the papers. (There's also a separate bar.)

Brasserie Zédel, in short, is a joy. Go before they put up the prices as they almost certainly will. (Apparently not, I'm told by Jeremy King on Twitter. But go anyway.)