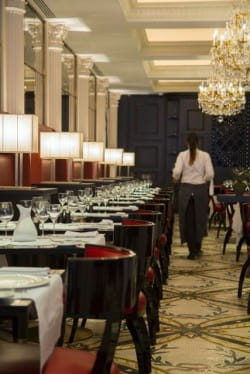 OK it’s large, (though not Zédel-large), mirrored and has all the necessary period French accoutrements including a rather fine mosaic-tiled floor but the cooking is in a different league from your average brasserie. Don’t come expecting an upmarket Café Rouge.

Eric Chavot, I guess, wants to put a bit of distance between his new restaurant and the fine dining scene at his last incarnation at The Capital hotel where he acquired two stars. This is more casual but not that casual. There are a couple of cuisine grandmère-ish dishes, notably a very dark sticky daube with comes in its own cast iron casserole but most are classics with a twist.

Steak tartare, for example, comes with a generous seasoning of capers and - a bit of a surprise - a generous binding of mayo. Being a bit of a tartare purist I wasn’t convinced about that. Nor was I totally smitten by Chavot’s twist on snails bourguignon, the oddest dish of the meal which came with meatballs and a potato ‘espuma’ - a bit like a cross between spag bol and cottage pie. But his filet de canette a l’orange (aka duck breast in orange sauce) with caramelised endives was a pitch perfect dish, the bitterness of the endives picking up on the judicious touch of orange in the sauce. And, right outside the French register, deep fried soft shell crab with whipped aioli, served chic-ly on a page of Le Parisien. was a dish to die for.

Desserts are also top notch. A ridiculously pretty rhubarb tart with a silky sorbet spiked with shards of white chocolate and a peanut and praline croustillant like a fantasy Snickers bar made it well worth leaving (just) enough room for pud.

Although the wine list is on the pricey side there are enough affordable options, especially by the glass, to ensure you don’t walk out with a Mayfair-sized wine bill. The very smart young French female sommelier Indira Salcede did a grand job of matching them to our dishes taking account of our interest in natural wines - there are quite a few on the list. (You’ll find one in tomorrow’s match of the week - I also loved her pairing of a soft fruity Fronton with steak tartare.) 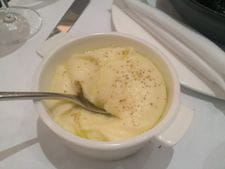 But what I’d go back for is the butter. Pale, ivory-coloured, creamy - it was, I think, the best butter I’ve even eaten. It comes on its own with the very good sourdough at the beginning of the meal or whipped into the accurately described ‘creamy mash’, a decadent, velvety Robuchon-esque purée to gladden the heart (and no doubt clog the arteries . . .). The best £3.75 you’ll spend on a side in London? Certainly in the top 5.

Chavot is a chefs’ chef - a skilled craftsman whose technique is as assured as his palate. Sometimes I think he’s trying a little too hard to break new ground - as with the snail dish - but that may just be to stir up controversy. So, not a brasserie really but a Michelin-star standard restaurant at less than Michelin prices - for the time being at any rate. Who on earth could complain about that?

I ate at Brasserie Chavot as a guest of the restaurant.