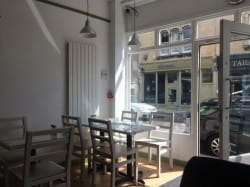 Actually it’s not strictly kosher either. Only one of the owners, Marta Aron, after whom the restaurant is named, is Jewish and they open on Friday and Saturday but hey, who cares? I suspect anyone Jewish will sob with gratitude at such authentic food.

We first went for Sunday brunch when the soundtrack scored an immediate hit with my jazz-mad husband. We also loved its low key, uncluttered style, the clean white walls, striking pictures and simple glass-topped tables, each one featuring a different Hungarian city map. 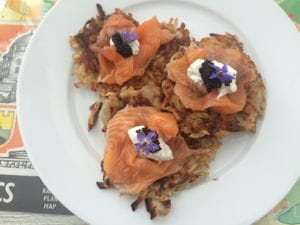 After we'd dithered for 10 minutes or so over what to order my other half went for the chicken salad sandwich with chicken crackling (on home-made challah with some very good pickles) which I spent the rest of the meal coveting though my perfectly cooked crisp latkes were irreproachable. We also felt duty-bound to try the chopped herring (below) which came stylishly presented with toasted bagel ‘chips’ which they apparently ship in from Brick Lane (The bagels, not the chips, obviously. Surely that arrangement can’t last? Here's hoping it can.) 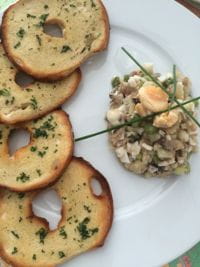 By this time we were totally stuffed (the portions are more than generous) but were talked into buying a slice of Marta’s elaborately layered Flodni cake* (below) to take away - and keep for 24 hours in the fridge, we were strictly instructed. I found it delicious but I suspect it might not be sweet enough for those of you who have a sweeter tooth.

As we made to leave Marta’s partner Stephen cunningly mentioned that duck was on the menu for the coming week so we booked again for supper the following Friday. Although the duck ticked all the boxes for me the highlight of our second meal was the Romanian steak (a US name for skirt, cut from the forequarter because the hindquarter isn't kosher, Aron's tells me) with some absolutely cracking goose fat fried potatoes. One of the best and certainly the most reasonable steak and chips in town. I wasn’t quite so convinced by the gefilte fish which lurked under a murky if tasty jelly but I think you’d have to be weaned on the stuff to fully appreciate it. They change the menu each week so you will no doubt find different dishes when you go. 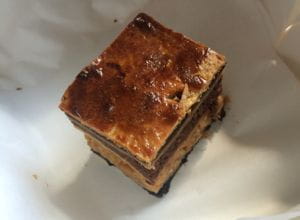 The drinks menu also offers some off-the-wall choices including celery soda and a (welcome on a warm evening) white wine spritzer though I thought - and cheekily pointed out - they could do with a bit more choice on the wine list. (Apparently that's now been addressed.)

I badly need to go back to try the salt beef sandwiches and the Reuben (a blogger I know orders it as a takeaway). Both are already so popular they’re having to order three times the amount of brisket they did when they opened three weeks ago.

With its Hungarian home-style cooking Aron's is more than a brilliant sandwich shop (as Giles Coren cuttingly said recently of Taberna do Mercado) but still, what sandwiches! There’s nothing in Bristol like them.

*a classic Hungarian dessert made from walnuts, poppy seeds, apples and plum jam

Aron's Jewish Delicatessen is at 19 Chandos Road, Redland, Bristol BS6 6PG. Tel: 0117 973 7165 and is open all day from Tuesday to Sunday and in the evenings, subject to demand, on Saturdays. (See their site for the exact opening hours.) Incidentally this now makes Chandos road one of the foodiest streets in Bristol. It also houses the Michelin-starred Wilks, No Man’s Grace and the Aviator bar if you fancy a drink beforehand.