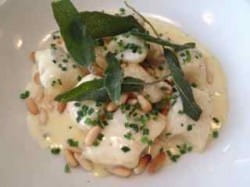 To your must-do list add 10 Greek Street which I checked out yesterday. I’d been reading glowing reviews of it for a couple of weeks, so went with dangerously high expectations which were not disappointed.

It’s a small restaurant with a short menu. Always good. I was pressed for time so stuck to a couple of starters - a nicely seared fillet of super-fresh mackerel with romesco sauce and pickled broad beans (possibly better unpickled - small quibble) and a heavenly plate of featherlight, pillowy little gnocchi in a creamy Gorgonzola sauce with pinenuts and crisp-fried sage.

Two courses, not much to go on, eh? Well yes but, as I say, there are other good reports (see Jay Rayner’s review if you don’t believe me) and the two things to stress are the ridiculously reasonable prices (£6 for each of my starters) and the wine list which is one of the best in London. Not because of the number of imposing and expensive bottles (come, this is Soho) but the fact that practically everything is available by the glass, very well priced and they offer you a taste before they pour to check if you like it.

I ordered a glass of wonderfully obscure Johanneshof Reinisch, Rotgipfler from Austria’s Thermenregion for just £3.75, a minerally, slightly smokey white that held its own with the punchy mackerel and sailed through the gnocchi. The most expensive wine by the glass is a £5.25 Pieropan Soave, the priciest bottle £40 (for a magnum of 2001 Marques de la Concordia Rioja Reserva)

Even better, they have a well-priced fine wine list which they will bring you on request. Well I say ‘list’ but in fact it’s scrawled in a notebook indicating the number of bottles they have left as well as the ones that have been drunk up. On the day I was there it included Pichon Lalande ’76 for £75 which would cost as much in a shop - if you could find it.

Personally I’d stick to the main list which keeps the meal down to a very reasonable cost. Can they keep the prices that low? I don’t know but enjoy it while they last.

Incidentally the restaurant only takes bookings at lunchtime. Tel: 020 7734 4677. www.10greekstreet.com.