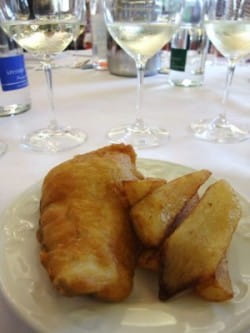 The competition is being run by the respected IWSC and spearheaded by two bright young MWs, TV presenters, Peter Richards and Susie Barrie who also happened to be married. (To each other which must make for interesting conversations over the breakfast table.) The recipes which include sausage and mash, lasagne and chocolate mousse have been devised by TV cook and author Jo Pratt and the judges are a mix of wine and food writers, sommeliers and wine buyers

What’s particularly good about the competition is that this is real food not an isolated ingredient tasted in an unrealistic way. (I can remember a tasting of wine and ham where all we had was a single cube of cold ham!) When the results are announced towards the end of July you’ll be able to find out what we thought was the best specific wine to drink with each recipe which are posted on the website so you can try them for yourselves.

That doesn’t of course guarantee you’ll agree. One of the things we’ve been intrigued by is how much we disagree about food matches, more than if we were tasting wine alone. I’ve been trying to work out why that is and think it’s probably due to the fact that personal preferences and past habits come into play more with wine and food matching. If you wouldn’t dream of drinking a full-bodied red with your chicken tikka masala for example you probably wouldn’t be up for it. The more tricky the pairing - and the wider the range of wines we were presented with - the more we disagreed. But in the last round of judging when we awarded the trophies the best matches really stood out.

The main problem though is what to do about the seasoning, condiments and other ingredients you put with a dish because these make all the difference. The fish and chips for example came without ketchup, tartare sauce, mushy peas or vinegar all of which would affect the wine match in some way. And the chicken tikka masala without any cooling raita or other curries.

Roast lamb came beautifully cooked - just rare with a little bit of light garlic-flavoured jus but without any accompanying veg or sauces - mint sauce would have certainly skewed the result. But once you start adding seasoning or sauces, which ones do you choose and where do you stop? The organisers played safe and went for simplicity - the more elements you add the harder it is to reach a decision.

Some recipes were also very tasty but atypical. Jo’s mushroom risotto was a dark, intensely flavoured version which was much stronger in taste than the typical creamy Italian style. In my view that leant it firmly towards a red rather than a white which I’d normally be happy to serve. And the chocolate mousse was equally rich and intense.

On a more geeky level it was fascinating the difference in mouthfuls made to a wine match. The lamb differed in flavour depending on the amount of fat and delicious rosemary-infused skin in your tasting portion. Finding a precise match for cheddar would depend on how mature it was and whether it was made by a clothbound or block process while the type and strength of a smoked salmon smoke (ours was a mixture of beech and oak) could certainly skew a wine pairing

In the end though we did amazingly well coming up with a selection of matches that I think will both please traditionalists and take people in some new directions which is what the competition is all about. There will be a few surprises for sure. I can’t wait to find out what the winning wines were.

PS You might wonder how we got through the sheer volume of food? By spitting food as well as wine - an unlovely procedure which is a good deal easier with some foods - like clean-tasting smoked salmon or lamb - than others, like palate-clinging risotto or mashed potato. Nevertheless I’ll be happy to have a couple of days without eating or drinking much!

Tags: What Food What Wine tasting wine with food