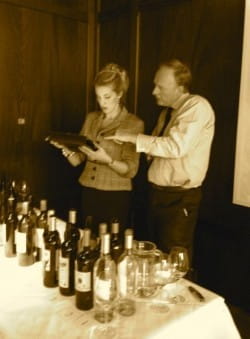 Each is allowed to show 11 wines - 4 under £10, 4 over £10 (no specified upper limit) 2 ‘icon’ wines, defined whichever way they want and 1 ‘lunch’ wine which none of us tends to drink because we’re too busy tasting. Still, it gives them an extra shot.

What struck me as most interesting is what they chose to show in 2012 and, even more so, which countries and regions they omitted. So - extraordinarily - no wines from Australia, California or New Zealand and none from Rioja, Alsace or Germany though Tanners pulled one at the last minute and substiituted an Austrian one.

France came out top in terms of numbers with almost two thirds the total wines on show: 43 out of 66, including the icons, 35 if you don’t include them. Of those 6 were white burgundy (no red, oddly - in fact only one pinot noir), 7 from Bordaux, including 3 dry whites) and 11 from the Rhone (including 2 white and 4 Chateauneuf-du-Papes). If you add the 8 wines from elsewhere in southern France (6 red, 2 white, mainly from the Languedoc) to that latter figure it comes to 19 - not including south-west France.

Does this make the merchants involved unadventurous? You certainly could argue that - undoubtedly they're from the more traditional end of the trade - but I think it rather indicates them chosing not to show wines that are over-represented in the supermarkets e.g. Rioja and New Zealand Sauvignon Blanc and to feature regions where they can genuinely add value because of their specialist knowledge*. Lea & Sandeman’s Le Petit Roy 11ème année from Domaine Jean Royer - Chateauneuf in all but name for £13.75 for example.

I’ll be writing more about these wines in the Guardian over the coming weeks but here are six of the best bottles under £10 - one from each merchant at the tasting. There should be reductions on all these prices if you buy an unsplit case.

Adnams
Pinot Noir, Paparuda Cramele Recas, Romania 2011 (13.5%) £5.70
Romanian pinot used to be pretty rough stuff but this is the best pinot under £10 I’ve tasted this year - much less sweet than comparable pinots from Chile. Pair with duck and game. 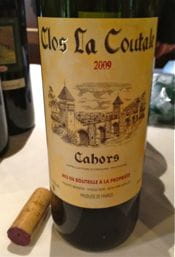 Berry Bros & Rudd
Clos la Coutale, Cahors, 2009 (13.5%) £8.95
A cracking Cahors - substantial but also refreshing - seductive, even. Made for confit duck and cassoulet, but would be great with beef casseroles too.

Corney & Barrow
Le G de Guiraud Bordeaux 2009 (13%) £10.50
White Bordeaux is my current passion so it was good to see three at the tasting. This is made in that glorious lush, fragrant, passionfruit-ish style. A snip at the price - even though it snuck in at over the £10 mark. Drink as an aperifif, I’d have said.

Lea & Sandeman
Tremonte Malbec Single Vineyard Reserva 2010, Chile 14% £9.50
A big beefy red of the kind you’d expect more from Argentina but a heck of a lot of wine for the money. And at least as cheap as it would be in a supermarket. Think steak.

Tanners
Tanners Douro Red 2010 13% £7.90
Lighter and less extracted than many Douro reds (a plus in my book) but certainly substantial enough to take on strongly flavoured food such as rustic Portuguese pork stews and even a rogan josh. Good with a cheeseboard too, I bet.

Yapp Brothers
Domaine Gardrat Vin de pays Charentais Sauvignon 2010 11.5% £9.50
One for this Indian summer weather. A crisp refreshing white with a lot of flavour for its modest level of alcohol. Drink with salads, especially with goats cheese.

* and Yapp, of course, is a specialist French merchant.