The meal was at Trishna, London’s latest high-end Indian restaurant which specialises in seafood. It’s an interesting venue which I’ll write about separately but for now I want to concentrate on the pairings which were devised by their Austrian general manager and sommelier Leo Kiem.

Each dish on the menu comes with an accompanying wine and/or beer. On the whole the pairings were very successful and even those that missed the mark (in my opinion) were interesting.

Squid with spiced rice flour, lime zest and chilli
A version of salt and pepper squid with a very light rice flour batter. Despite the description it wasn’t too spicy - you could really taste the squid The conventional pairing would have been a champagne or sparkling wine but the smooth dry Rotgipfler from Reinisch in Austria’s Thermenregion Kiem had chosen worked perfectly.

Hariyali Bream, mint coriander and green chilli masala, charred tomato kachumber
My favourite dish and my joint favourite pairing. A marvellous dish of grilled bream that had been smothered in a coriander-based wet paste, served with spiced cherry tomatoes - a quite unpredictable pairing with a very attractive crisp Dr Burklin-Wolf Riesling 2007 (It was probably the herby paste that made the wine kick in)

Isle of Wight Plaice, fried with coastal spices served with crushed pea and mint
A great indian riff on fried fish and mushy peas. Slightly less subtle than the other dishes with the odd effect of making the accompanying 2004 Pinot Blanc Auxerrois Vielles Vignes from Domaine Schoffit in Alsace taste slightly sweet. Something like an Alto Adige Pinot Grigio would have been marginally better I felt. (The accompanying peas by the way were wonderful)

Isle of Shuna Mussels simmered in a coconut and turmeric masala
Kiem brought out a biodynamic Chasselas from Alsace with this dish which I didn’t think worked. It was too funky - almost slightly sherried in character. I’m not sure what I would have matched with this - the coconut flavour was quite pronounced. Possibly an Alsace Pinot Gris or a Viognier though I liked the idea of an Erdinger weiss bier which is also an option. (The current pairing is a 2008 Chenin Blanc from Sula Vineyards in Nashik, India)

Cornish brown crab with butter, pepper & garlic
We tried this as an extra as it was one of their signature dishes. It was fantastic - and fantastically rich - swimming in butter. It was a bold move to pair it with a heavyweight Argentian red a 2005 Cuvelier Los Andes 'Collecion' and I didn’t feel it worked which isn’t to say that another less tannic red wouldn’t have fared better - possibly a Merlot. Personally though I’d have gone for a barrel-fermented Chardonnay.

Mango Kheer - Mango rice pudding with a sweet chilli coulis
Already a candidate for one of my pairings of the year with a glass of 2003 Chateau Filhot, Sauternes. A wonderful idea mixing fresh mango puree with warm, gently spiced rice pudding and it showed off the Sauternes in all its luscious glory. One of those pairings that’s more than the sum of its parts. 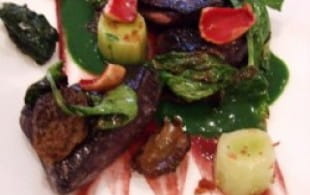 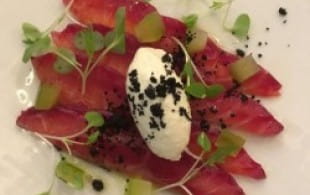