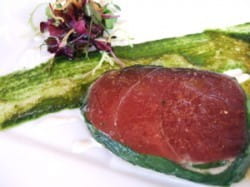 Lunch is for WIMPS!

The inappropriately named WIMPS are a group of wine lovers who regularly share some of the world’s best bottles at one of London’s best restaurants, The Ledbury. The group evolved out of the exchanges on fellow wine-writer Tom Cannavan’s wine-pages wine forum. WIMPS apparently stands for Wine Imbibers of Modest ProportionS, the idea being that - given that the events take place at lunchtime - the participants are limited to bringing a bottle a head (although I was told that the rule is, er, flexible!).

Yesterday’s theme was the Northern Rhone so the menu, which is devised by the Ledbury’s talented young chef Brett Graham to go with the type of wines that are being served, was predictably strong on protein: raw tuna, followed by rare calves kidney and rare slow roast fillet of beef.

More interesting was the almost certainly conscious amount of umami in the dishes - soy and oysters (and possibly a touch of sesame oil) in the little salad accompanying the tuna, the kidneys were cooked in smoked kidney fat and served with caramelised onions and bacon and the beef came with a pure of summer truffles.

It was interesting too that the wines I liked best with the food were not those I most enjoyed on their own rather bearing out restaurateur Nigel Platts-Martin’s assertion that “The best food match for a great wine is no food”. (Platts-Martin, a noted winelover, owns the Ledbury and is a regular at these events). I wouldn’t go that far, obviously, but even at this level of cooking it’s hard to find a dish that doesn’t detract even a little from the finer nuances of such subtle and complex wines. Here are the highlights of the lunch:

Loin of tuna wrapped in basil with oyster mayonnaise, soy and a salad of radishes
with Jaboulet's 2001 Hermitage Chevalier de Starimberg and Chave's 1990 Hermitage Blanc
Two fabulous wines - both deep gold, rich, fat and waxy laced with peach and roasted pineapple. The Jaboulet which was fresher dealt with the strong Asian flavours of the dish better than the more complex Chave which was a truly extraordinary bottle. Both were slightly knocked out of kilter by the basil. Possibly seared tuna might have been marginally better than raw but a great dish.

Calves kidney cooked in smoked kidney fat with grilled onions, bacon and sweet sherry with a Jean Paul Jamet 1998 Cote Rotie, a 1998 Gilles Barge Cote Rotie Cote Brune and a 1999 Pierre Gaillard Cote Rotie
Three very different wines of which I felt the Jamet was the star - still beautifully fresh, fragrant and supple. However it didn’t work as well with the dish as the more ‘animal’ Barge which dealt much better with the bacon and sweet onion accompaniment (possibly a drier sherry would have preserved the flavour of the Jamet better). The Gaillard, slightly one dimensional on its own by comparison also sprung into life with the dish which accentuated its black pepper notes - a nice added touch of spice to the food. A bold choice for a large gathering, particularly as the kidney was cooked very rare but one that Graham pulled off with style

Slow roast fillet of beef with baked potato rossini and a pure of summer truffles with Chapoutier’s 1992 Cote Rotie La Mordore, Bernard Faurie’s 1990 Hermitage and Chave’s 1983 Hermitage
With its accompanying truffle pure - and truffle shavings - this was a dish designed to show off a fine red wine to perfection but would it be the Cte Rtie or the Hermitage which stood out? Despite preferring the generous, sensuous La Mordore in which you could almost pick up the flavour of warm stones I thought the Fauri Hermitage with its gorgeous dark, damsony fruit - almost a touch of damson eau de vie - edged it though both were quite lovely combinations. The slightly funky, leafy sousbois character of the Chave got slightly lost in the process though the sauce - rare in restaurants - was by no means over-extracted. (Admirable restraint from Graham)

Raspberry souffle with white chocolate and elderflower ice cream
The 1996 Chapoutier Vin de Paille we had on our table was a bit of a heavyweight for this light, ethereal and quintessentially summery souffl but it didn’t really jar either, providing an attractive touch of honey to the pairing. Something like a tarte tatin or some roasted peaches would have worked better with the wine and a lighter, younger sweet wine would have been arguably better suited the dish. Possibly even a Clairette de Die though I suspect the members of WIMPS would have dismissed that as far too wimpy ;-)