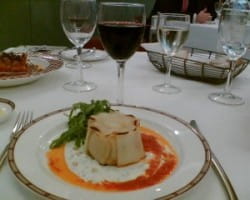 Even MPs indulge in a spot of food and wine matching!

Lunching with an MP friend the other day at The Adjournment (one of the House of Commons in house restaurants) I was amused to spot a recommended wine pairing with the daily special: a spiced potato cake with sun-dried tomatoes and soured cream with a 2001 Carmenre from Vinedos Sutil in Chile’s Colchagua Valley, a big, gutsy red which rather overwhelmed the delicate spiced potato cake which tasted a bit like a vegetarian samosa filling.

All was not lost though as I nicked my companion’s glass of Wickham Fum, a delicate crisp, typically English dry white which actually went very nicely. And my Carmenre matched his cornfed chicken with a gutsy tomato, pimento and black olive sauce.

A couple of other observations might interest you. One, how very reasonable the wine prices were - between £2.30 and £2.75 a large glass. (MPs are renowned for looking after themselves!)

Secondly that despite the modernity of the restaurant and the apparently healthy Mediterranean menu there was a pervasive smell of deep fat frying (probably from my potato cake if truth be told).

The restaurant is apparently regarded as dangerously avant garde by older Members who prefer to eat the other side of the street at The Churchill Room where the menu and ambience is more like that of a gentleman’s club. (Apparently they keep a book at the restaurant where MPs can record any critical comments. They run along the lines of “Sticky toffee pudding not sticky enough!” my friend tells me) Another world.