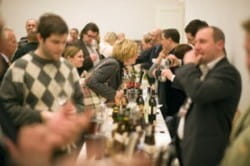 Zagreb puts itself on the Gourmet Festival circuit

Croatia is on a roll, wine-and-gourmet-wise, and the Zagreb Festival is the place for a rapid immersion course in Plavac Mali, Teran, Malvasia and the other regional grapes which go into some of the fearsomely alcoholic products now at large across the Adriatic.

I arrived at Zagreb’s pleasant little airport armed with a list of the Decanter awards, 8 Gold Medals last year, which occasioned excited headlines like the Telegraph’s “Croatia Hailed As A World Force In Wine.” Several eminent UK wine writers were on the same flight, dashing my hopes of claiming semi-expert status on Croatian wine for lack of any competition.

The Festival took place in the elegant Viennese Secession style Museum of Arts and Crafts in the centre of Zagreb. The Croatian capital is charming, a sort of mini-Vienna, well preserved but nicely time-worn, and serviced by an interesting range of twentieth century trams, busy orderly cafes, and, jewel in its wine-and-gourmet crown, a fabulous food market bang in the historic centre, aisle after aisle of Sixties stainless steel and marble stalls and cafes, packed with fascinating produce and hoards of ordinary citizens shopping busily, a sight to make any British city-dweller weep with nostalgia and envy.

The great majority of the 140 wine exhibitors filling the Museum salons were Croatian, divided roughly into the major wine regions, of which the most prominent include Istria and Dalmatia on the coast, and Moslavina, Pokupolje, Plesivica and Slavonia in the inland, or continental, territory.

I started on the stand of Degrassi, a top Istrian producer, where I found Sinisa Skaberna, one of the sommeliers conducting workshops. Have the Decanter accolades resulted in a boom for Croatian wine, I asked. Not exactly, it seems. In increasing international recognition, yes, but not in export sales: as far as the UK is concerned, no one is yet importing. But a new generation of wine makers is nonetheless at the end of a ten year revolution in Croatian wine-making, a process which has often involved reclaiming land expropriated by the State in the Forties and Fifties and reversing decades of nationalized stagnation, as well as weathering the destruction of the Yugoslav civil war of the Nineties.

Moreno Degrassi is a case in point. A successful restaurateur, he began wine-making as an amateur in 1996 and now devotes his life to producing Malvasias and Chardonnays of outstanding non-fruity European elegance – I’m quoting his friend sommelier Skabena. On the nearby stand of Roxanich, whose Super Istrian red had been tipped as a find by the editor of the Austrian magazine Falstaff, there was a similar story: a mechanical engineer turned impassioned winemaker using biodynamic methodology and maximum ecological correctness, as do apparently many of the new generation of Croatian viticulturalists.

The gourmet part of the Festival was somewhat secondary to the wine, with just a handful of producers of ham, cheese and olive oil. But the events programme contained interesting items. A workshop on “forgotten dishes", for instance, by the chef-proprietor of a country bistro near Zagreb, who had reversed the trend for increasingly internationalized restaurant food by researching recipes from elderly female relatives. These featured ingredients such as pork from a local farmer who had reconstituted the moribund local Turopoljske rare breed from the last few animals left wild in the forests. The pork was delicious, as were the other dishes, dense in pasta or crepe batter and potatoes, turbocharged with double cream, cheese, and garlic.

Then there was the Gala Dinner, cooked by a half dozen guest chefs. After a range of titbits accompanied by Prosecco from the producer Bisol, whose marketing manager assured me the great conquering march of Prosecco in is merely in its infancy – apparently Germany’s swimming in the stuff- the first Croatian white, a Reisling-like Malvasia from Trapan in Istria, was poured to accompany a paupiette of grouper in a nice buttery white wine sauce cooked by the chef of the hotel. (Where did the recipe come from, I asked him? Llandudno, was the answer).

We moved on via seabass, then Sicilian Modica bitter chocolate vermicelli with guinea-fowl (very disappointing ), to roast pigeons (smuggled into the country in the Italian chef’s luggage, apparently) accompanied by a Cabernet Sauvignon from the top Dalmatian producer Bibich. Finally, to accompany roast pears in honey with a pistachio and wine “spoom”, one of the celebrated dessert whites of the region, though not from Croatia but the producer Batic from adjacent Slovenia, whose successful sweet whites led the way for Croatia.

Around dessert time I discovered the two cheerful Zagreb gourmets on our table were not press, but wine-lovers who funded their passion via the operation of sex shops (or was it the other way round?). Asked to recommend wines from near their home city, they proposed the producer Tomac, from the local vignoble of Plesivica. This was fortuitous, because we’d been to visit the Tomac domaine, and found an interestingly individual multi-generation team exploiting six hectares of vines, all of which are pruned personally by Tomac father and son. In their wooden tasting chalet we lined up the bottles and heard how they’d imported great clay amphora from Georgia, buried under the chais, to develop the complicated procedure by which they made their long-maturing and strong (up to 16 degree) Sauvignons, Chardonnays, Reislings, Grasevinas and other local varietals. “Croatia has a very old wine making tradition” commented Tomislav Tomac, ”there’s no reason why we shouldn’t make excellent wines if we have the courage to do what we think best.”

With this underlying philosophy, the third Zagreb Festival was apparently a great success. And a personal triumph for Ingrid Badurina Danielsson , the former La Stampa correspondent who founded it on a shoe string three years ago. On the final day, the Croatian Minister of Tourism toured the stands. Whether it was the killer Chardonnays, the Turopoljske pork, or even headier treats is not known, but something impressed him enough to announce Government financial support for the next edition, so the future looks assured. Zagreb is already in my diary for 2011, neatly filling the dead time between New Year in Dubai and Rio Carnival.

Philip Sweeney is a freelance food and travel writer who has his own website The Boulevardier. He attended the Zagreb Wine Gourmet Festival as a guest of the festival organisers