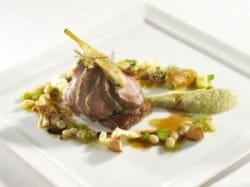 The long, winding drive that carries you to Gidleigh Park, hidden away in one of Dartmoor’s most out-of-the-way corners, serves almost as a metaphor for being carried back in time. As you sweep across the last hundred metres towards the country house hotel, its half-timbered arts & crafts exterior and its manicured grounds conjure up a bygone era.

The wood-panelled hallway, mullioned windows and exquisitely furnished rooms do little to dispel the illusion. In fact, if it wasn’t for the state-of-the-art fixtures and fittings, it would be easy to imagine oneself as a guest at one of those 1920s country house parties that formed the backdrop for many of Agatha Christie’s murder mysteries (an impression reinforced by the fact that the novelist lived locally and, who knows, may well have been a house guest of the shipping magnate who once owned Gidleigh Park).

These days, the guests at Gidleigh come for the cosseting – and, most notably, for the two Michelin-starred cooking of the hotel’s executive chef, Michael Caines. Less well known – but as much a draw for those with the inside scoop – is the fact that Gidleigh Park has a wine list that lives up Caines’ cooking.

Edouard Oger, a graduate of the Hotel du Vin group, is the talented young sommelier in charge of a 52-page wine list. Although it name-checks most of the wines and appellations that would be expected on such a list, Oger is equally passionate about introducing his customers to the quirky and unexpected. There’s a strong selection of organic and biodynamic wines on the list, a rotating selection of which are flagged up in the first few pages. English wines – among them cuves from nearby Sharpham Vineyards and Cornwall’s Camel Valley – also feature prominently.

Oger takes a particular delight in advising diners on food and wine matches, although he’s careful to only tender as much advice and information as his clients seem to require. Having offered me a flute of Gimonnet’s citrus- and honeysuckle-tinged 1er Cru Cuis, Blanc de Blancs Brut NV as an aperitif, Oger recommended a glass of Bernard Gripa’s Les Figuiers, St Peray 2008 to accompany a starter of frog’s legs and crayfish with a snail, nettle and garlic risotto. By itself, the wine, a blend of 50/50 Marsanne and Roussanne showed some vivid apricot fruit, tinged with marzipan and a touch of oak, enlivened by a luminous streak of acidity. The green, herbaceous flavour of the nettles drew out a subtle streak of herbs in the wine, while its earthiness and minerality complemented the snails perfectly, without overwhelming the delicate, sweet flavour of the frog’s legs.

The main course, a dish of local lamb – part of which was cooked rare, and part of which was served confit'd, sandwiched with some boulangre potatoes – was accompanied by a bold fennel pure and a tapenade jus. Flavours as strong as these cried out for a rich, gutsy wine, and Oger provided it in the shape of glass of Domaine Milan’s Clos Milan 2004 from Baux de Provence.

A typical southern French blend of Grenache and Syrah, complemented by a dollop of Cabernet Sauvignon and just a touch of Cinsault and Mourvdre, the wine is (as Oger put it) ‘biodynamic, but not certified’. It provided a heady mouthful of flavours, with notes of plums and cherries in eau de vie, alongside leathery, spicy notes with just a touch of black olives and garrigue.

The tannins were gently grainy, with plenty of acidity to create a sense of balance and proportion, despite the wine’s richness and weight. It proved a totally classic match for the dish, with the weight and depth to cope with the rich meat, enough freshness to cut through the fat and its garrigue and olive nuances worked in total harmony with the accompaniments to the meat. ‘Without the fennel and the olive tapenade, I could have matched this dish with a Bordeaux or a Rioja,’ said Oger, ‘but you need that garrigue note and a hint of leatheriness to take on everything else on the plate.’

I have to admit I was initially disappointed by Oger’s choice of Willi Opitz’s Beerenauslese Pinot Noir 2005 as a pairing for a dessert of strawberry mousse, jelly and sorbet with a black olive and basil pure. By itself, the wine is not terribly compelling: a touch simple, it stops just short of being cloying, with barely enough acidity to balance the high levels of residual sugar. I needn’t have worried. Once again, Oger’s palate was precise and true. The savoury notes of black olive and the freshness of the candied basil leaves provided a wonderful counterpoint to the wine’s sweetness, and brought out its fruit, which, in turn, harmonised perfectly with all those intense strawberry flavours.

I’d have been happy to stagger off to bed at this point, replete and more than satisfied by both food and wine, but Oger rushed off, excited, to his cellar and returned bearing a glass of one of his current enthusiasms, a cidre de glace from Qubec’s Domaine Leduc-Piedimonte which is made from frozen cider apples using a similar technique to that used to make icewine.

Intensely sweet and fruity, but shot through with a lightning bolt of acidity to compensate for the high sugar levels, it slipped down remarkably easily. Oger likes to pair it with autumnal desserts based on apples. But, as he pointed out, it’s also a thoroughly delightful drink to sip on meditatively at the end of a long evening. On this point – as he had been on so much else that evening – Oger was absolutely spot on.

Natasha Hughes stayed and dined at Gidleigh Park as a guest of the hotel.