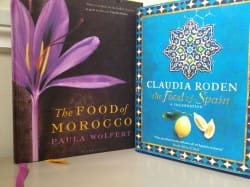 As I mentioned recently, I’ve decided to review cookbooks in pairs or, in some instances, in larger groups on the basis that most people buy 3 to 4 cookbooks a year not 3 to 4 a month like me. It’s not just that you might not want to spend the amounts involved. It’s the sheer scale (522 pages and 1.7kg in Roden’s case, 518 and 2.1kg in Wolfert’s) Have you got room for two books this size on your shelves?

The Food of Spain is Roden’s first foray into Spanish food - although she has written about Mediterranean food, including Spanish food, before. Wolfert is on more familiar territory having written her first book on Morocco back in 1973.

How are the books structured?

Roden’s, as usual, is much more than a cookbook with 118 pages on Spain’s history and culture, regions and ingredients before you even get to the recipes which are then divided up by types of dish (there’s also an appealing short section on drinks).

The Food of Morocco pitches into the recipes on p. 53 after a very helpful introductory section on ‘the essentials of Moroccan cooking’ including spice mixtures, fragrant waters and an invaluable '10 tips for preparing Moroccan food.'

How much of a feel do you get for the country and culture?

Far more from The Food of Spain although Wolfert’s book has some useful explanatory notes and sections on different types of dishes such as couscous and tagines. Roden, like a learned friend, introduces you to parts of Spain and cooking traditions you might not know - in my case the Asturias. “This sensationally beautiful green and misty land of rugged, towering mountains, fast-flowing rivers and lakes is filled with little farmsteads (caserias) and apple orchards” she writes. I immediately want to go there.

Do the recipes work? 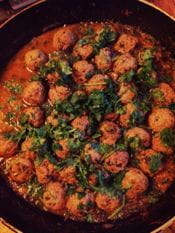 Neither book is for beginners. Roden’s recipes assume a fair amount of prior knowledge, though they’re admirably short and simple. Wolfert’s were more complicated and time-consuming but produced better results.

In the end I made two - a kefta (lamb meatball) tagine (p401) and a marak (warm salad) of cauliflower (p419) and my husband, inspired, a further one, a crushed, spiced carrot salad (p79). Apart from producing more meatballs than suggested (40 instead of 24) all were dead accurate and produced absolutely delicious authentic-tasting dishes that were better than any I’ve had outside Morocco. (The meatballs were beautifully light.) Wolfert’s tip on making saffron water is especially useful.

Roden’s book clearly relies more on tip-top ingredients of the kind you’d probably only have access to if you had a garden or smallholding. Salmon with peas (from Asturias p338) is a lovely summery recipe but I found my late season fresh peas didn’t cook in the time suggested - probably because neither they nor the lettuce was freshly picked. You could use frozen peas of course - and a sprig of mint, I suggest. 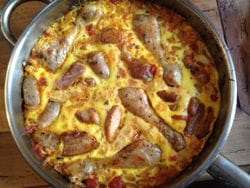 And the arroz con costra or baked rice with an egg crust - a fabulously comforting paella-ish dish - wouldn’t have worked if I hadn’t added onion, garlic and saffron - the latter oddly absent from the ingredients though the accompanying photo showed a saffron-coloured topping. I checked online and found other recipes generally included both saffron and garlic. It would have been pretty bland without it. An editing slip-up, maybe.

Other recipes to try

There were some tempting eggy desserts in The Food of Spain - I particularly liked the sound of a crème brulée style apple cream (p 465), for which you need a blowtorch by the way, baked crab with cider (p323) and potatoes with fried onions, garlic and eggs (p 242) which sounds like the perfect brunch dish.

I found I was bookmarking almost every other recipe in The Food of Morocco but am particularly looking forward to making aubergine zaalouk (p93), fish baked with almond paste (p265) and tarte tatin with apples, raisins and rosewater (p462) which Wolfert says is her only concession to 'nouvelle cuisine Marocaine' but 'so good' she had to include it.

Are they visually appealing?

To be honest I probably wouldn’t have picked up The Food of Morocco on the strength of the cover (a saffron crocus on a dark brown background). It looked too much like a coffee-table book. And some of the recipe photographs (by Quentin Bacon) don't really do the food justice. Jason Lowe’s pictures for The Food of Spain are more enticing and evocative. But they’re both lavishly illustrated.

Taketobedability - in other words are they a good read?

I would (and did) take The Food of Spain to bed and read The Food of Morocco at the kitchen table. Roden is always a great read. You study Wolfert - which doesn’t mean she isn’t readable just that you have to concentrate more.

At £25 the Claudia Roden book is £10 cheaper than the Food of Morocco (£35) which might make a difference if you’re buying it as a gift though the latter has more recipes. For roughly the price of a main course in a posh restaurant though, both are great value.

As I say these are not books for the inexperienced but either would be a treat for a keen cook, especially one who’s been to or lived in Spain or Morocco. Or who is a Claudia Roden fan though this is not, I would venture, her best book (my favourites are A New Middle Eastern Food and A book of Jewish Food, both marvellous).

As a cookbook I would go for Wolfert’s which will totally open your eyes to the fantastic tastes and subtleties of Moroccan cuisine. It’s the one I want to go on cooking from. 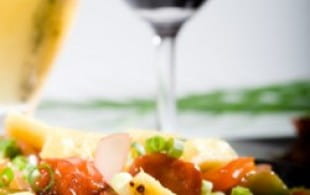 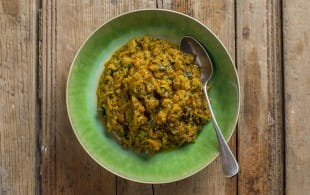 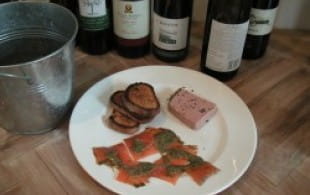 Claudia Roden's recipe for potatoes with fried onions, garlic and eggs (p 242) may sound "like the perfect brunch dish" but it entirely omits garlic in either the ingredients or the instruction. That's a bit sloppy. It's the first recipe I read in the book sadly...

Must take a look at both of these. Funny, when I saw the covers I thought both were lovely but the brown one with big flower was stunning! That's what makes horse races.