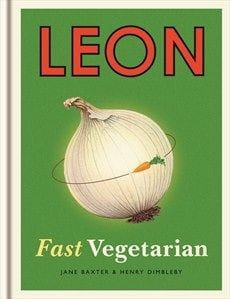 Jane used to work at the Riverford Kitchen in Devon and I’ve frequently dipped in to the two books she’s written for them, The Riverford Farm Cook Book and Everyday and Sunday: recipes from Riverford Farm. Although she’s a chef she’s a really great home cook with an intuitive feel for how ingredients work together.

This is a slightly bigger book, divided by types of meal (breakfast & brunch, pasta, grains & pulses, rice & curry ...) rather than ingredients or seasons. As well as Jane’s own recipes there are contributions from co-author Henry Dimbleby and some nice guest recipes from family and friends, Henry’s mum Josceline Dimbleby and restaurant critic Giles Coren among them. Plenty would be suitable for kids - it’s very much a family cookbook.

There were a lot of recipes I wanted to make from the book but settled on three: 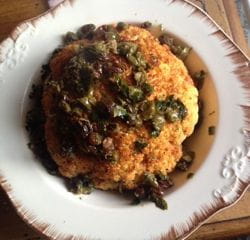 The first, as I was somewhat obsessed with a deep fried cauliflower I’d had in Paris, was a whole roast cauliflower with a caper and golden raisin dressing though not being able to find golden raisins I used ordinary ones instead. The taste was great (it also involved lashings of butter and smoked paprika) but the cauliflower a little undercooked even after giving it extra time. I blame the Aga but might possibly think of blanching it first another time to get it cooked right through (I reckon they did that in Paris). It makes a fantastic centrepiece for the table - I can imagine it with roast pork if you’re not a veggie.

The next was a spinach, squash and blue cheese bake because I had some Stilton and double cream to use up. All it needed in addition was some butternut squash and spinach (although I reckon I could have substituted chard), some fresh sage (I used dried) and some walnuts for which I substituted pistachios. A really good dish with a lovely balance of flavours though for four rather than the suggested 4-6 unless there were several other dishes on the table. Cooking it at a low temperature to set the custard gave it an indulgently smooth silky texture. 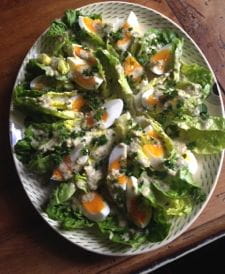 The third recipe - and an absolute triumph which I’ll definitely make again - was a Little Gem and egg salad which had the best vegetarian substitute for a caesar dressing I’ve ever tasted. Again I had to make a substitution. Having neither pernod or anisette I used a tsp of fennel seeds crushed with about 2/3 of a teaspoon of Maldon salt. I added it cautiously and found just over half that amount was enough to get the aniseed flavour I imagine Jane was looking for. The dressing also contains hummus, Dijon mustard and soy sauce among other ingredients. Goodness knows how she came up with that combination but it’s an absolute winner. You could, she suggests add some croutons to the salad too.

Other recipes I’ve earmarked to try include fennel, radish and broad bean salad, orecchiette with peas and spinach, Puglian bean purée (Jane spends a lot of time in Italy), green bean and cashew curry and stir-fried spiced spring greens. I also love ‘the Snickety Corner’ - a quirky line-up of fridge snacks and there’s a great selection of sides. Some nice desserts too though they aren’t the main point of the book. I definitely fancy the parsnip, cashew and coconut cake and you can find Jane's rhubarb and strawberry crumble sundae here.

The one drawback of the book is that while the recipes are simple, justifying the title Fast Vegetarian, the sourcing of the ingredients isn’t necessarily as straightforward. Even living in a city and with a relatively well-stocked storecupboard there were ingredients I found hard to track down. A garden - or even a couple of herb boxes - would certainly help and are encouraged at the start of the book.

And while there are helpful tips at the bottom of each recipe and a very useful ‘Happy Families' section which tells you how you can substitute one vegetable for another you need a bit of experience to get the best out of the book.

That said the recipes I tried were bold, delicious and inspiring. I’ll definitely be dipping into them again.

* you’re a vegetarian, obviously, but even if you aren’t and want to introduce more vegetarian food into your diet

* you get a veg box and need inspiration as to what to do with it, though Jane’s other books (see above) would also help

* you’re a keen cook with a well-stocked storecupboard

* you have reasonably adventurous kids - or kids you want to eat more vegetables.