To those of you who think I’m being unfair let me hasten to say I’ve no problem with Fairtrade branding. I regularly buy Fairtrade coffee, chocolate and bananas and occasionally honey and tea. All those products have improved immeasurably over the years. But not wine.

The main problem appears to be that the supermarkets aren’t getting behind it - presumably on the basis that they reckon consumers are unwilling to pay a premium for Fairtrade wine. But given the money that goes to support Fairtrade producers is pence per bottle I don’t think that really washes. The fact that Tesco has only three Fairtrade products in its entire range, and that includes an low-alcohol aromatized wine - says it all. With the honourable exceptions of the Co-op and Marks & Spencer, they simply don't appear to be interested.

I guess also that the Fairtrade Foundation doesn’t want to be seen to be promoting alcohol quite as actively as it does bananas.

But there is also a problem that the Fairtrade wines made in South Africa - the most important Fairtrade market - are not as good as they could be. Not in the UK at least. One of the most fascinating aspects of my recent trip to the country was the discovery that there are terrific Fairtrade wines out there, most notably in Nederburg's Manor House range, whose shiraz I made my wine of the week the other day. Most of it goes to Canada and Sweden.

The company who invited me, Distell, has an interest in two other Fairtrade projects Earthbound (formerly known as Tukulu) and A Place in the Sun whose work you can see on YouTube. The big difference is that both are in premium grape-growing areas (Darling and Stellenbosch) rather than the less quality-oriented areas like Robertson and Rawsonville some of the other Fairtrade producers use. They also work on lower yields (meaning more concentrated, better quality wines). 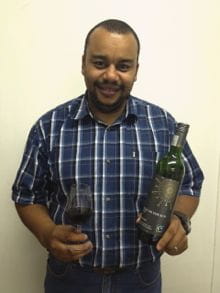 The wines that are made from these grapes are also made at premium wineries (Zonnebloem in the case of Place in the Sun, Nederburg for Earthbound) by the same winemakers who handle the main brands.

I was particularly impressed by Place in the Sun’s lovely smooth ripe 2013 Merlot which is as good as cellarmaster Deon Boshoff’s Zonnebloem version. The shiraz is great too. Dean (right) reckons the secret is giving wines more time “especially the reds.”

Earthbound while not quite in the same league (the 2014 Sauvignon was just about to be bottled, a bit prematurely I felt) is also made from organically produced fruit but there is a lovely pinot noir in the range, a Fairtrade rarity, which you should look out for when it comes over later this year. (A deal is apparently in the pipeline.)

The fruit for this comes from the huge Papkulsfontein farm which has 375 hectares under vine, 175 of them organic. "Darling is known as a cool climate region because it has slopes facing the ocean but as you move further inland to Groenekloof the region gets warmer and there’s a lot of red clay which makes it a fantastic farm for reds" says winemaker Samuel Viljoen. The fact that the vines are dry-farmed - the vineyard is too costly to irrigate - helps keep down yields

There is also another scheme in South Africa which protects workers' rights and conditions in the wine industry called the Wine Industry Ethical Trade Association or WIETA which was established back in 2002. It’s a not-for-profit organisation of producers, retailers, trade unions and government representatives and covers such issues as health and safety (e.g. protective clothing while spraying) as well as child labour (participants may not employ children under the age of 15 and only between 15-18 if the work doesn’t interfere with their studies). It covers working and living conditions, working hours, sexual harassment and the right to join a union.

It’s an impressive charter which I think should be more widely promoted than it is. (This may sound harsh but you sometimes get the impression that the industry would rather talk about how much it cares about the environment and wildlife than people. Maybe because wage rates - around 105R or £5.85 a day - though recently increased are still painfully low*.)

Nevertheless I left South Africa optimistic about the future. A company like Distell - and some of South Africa’s other powerful and wealthy wine companies - have enormous resources and clout. If they chose to give Fairtrade a higher priority and profile it could transform the whole wine industry.

We in Britain - retailers and consumers - also need to do our bit. I like to think we’re no less willing to spend money on Fairtrade wine than the Swedes, Danes and Canadians. I hope there will be wines on the shelves within the next couple of years to prove me right.

As Samuel Viljoen of Nederburg put it. "People may buy organic and Fairtrade wine out of sentiment but what will keep them coming back is quality."

* Fairtrade rates are a little higher at 108R (£6) a day plus a 5 cents per bottle goes back to community projects. And many workers get free housing.

I know it's a question of what you pay but the Place in the Sun prices aren't unreasonable (about £3 in SA, £6 in the Netherlands) And I do have a go at the supermarkets for their pricing policies and for failing to commit to Fairtrade wines. That said I'm more than happy to come and visit the Breedekloof area next time I'm in SA

Dear Fiona,
As much as I respect your view, I consider your understanding of the topic to lack some very important (read crucial...) context.
1) Some decent volume of all sorts of different varieties are being sold to some of the "powerful and wealthy wine companies" - product produced in Breedekloof.
2) You are not comparing apples to apples as the price bands generally differ between Fairtrade Wine produced in Breedekloof vs "premium grape growing regions".
3) Supermarket groups in the UK (as well as main land Europe) continuously drives prices down! Not only on the conventional offering, but also FLO certified. As a percentage of cost, the required Fairtrade premium is much higher on an entry-level offering vs mid- to premium level.
May I be so bold as to also extent an invitation to you, to also spend some time in our area, thus familiarizing yourself with the true facts and required context?

Well there has to be some explanation for why the quality of much of the Fairtrade wine we get in the UK is so poor and that struck me as a plausible one. They told me they sourced their grapes from their own farms - Fransmanskraal in the case of Place in the Sun and Papkulsfontein for Manor House and Earthbound. I saw no reason to disbelieve that since the wines had been certified but as you raise the issue I will put it to them.

Hi Fiona I presume you had to return the favour to the company that invited you. There are no free lunches in the world. But to do it in such a way is really laughable. Taking a general swipe at areas where your hosts actually regularly source wine from is actually counter productive.

Dear Fiona, I don't doubt your sincerity in providing your readers with accurate information. Just for a second or two and for the sake of accurate reporting, consider the following. These wonderful protagonists of good quality Fairtrade wine that you refer to in your piece, source most of their bulk Fairtrade wine from the areas that you refer to as lesser quality producers. A huge contradiction don't you think? With all due respect, please research better when you intend to name appelations or areas. I do however agree in full with your message that quality within a Fairtrade offering should never be compromised.