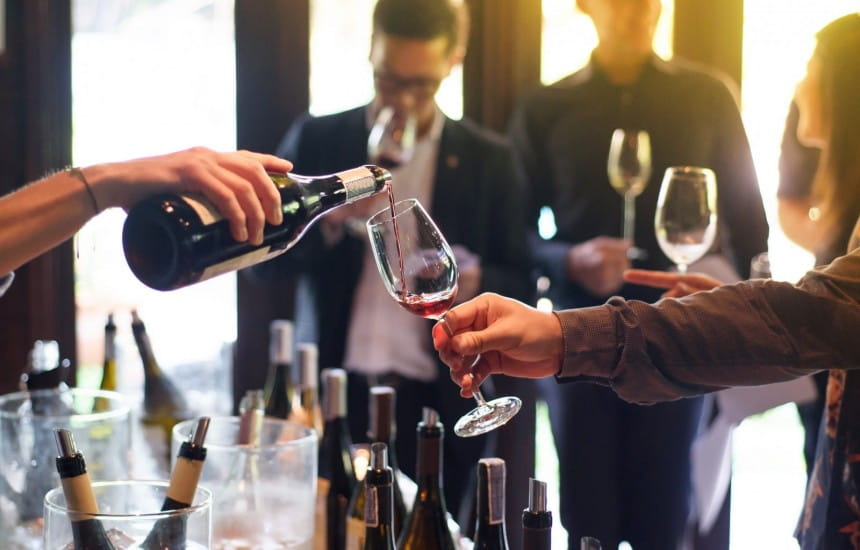 They definitely have their advantages in terms of fewer bottles to taste and access to winemakers who might not always have time to make themselves available in person to journalists on a press trip. Having the opportunity to dip into a wine over 24 hours or longer, particularly with food, also gives you a much more rounded impression of a wine too. But are decanted samples - on which these tastings are mainly based - a fair representation of what's actually in the bottle?

Wines of Australia has done a number of tastings based on mini bottles but has arranged for delivery of the wines at the last minute so that the samples don't deteriorate. I've received other samples where the quality hasn't been so reliable.

It's obviously expensive both from the point of view of the amount of wine and the cost of delivering it to send out whole bottles but maybe it's the only way to ensure the recipient gets them in the same condition as those they're writing for or selling to.

Of course it's not the only variable in terms of a tasting experience as I highlighted on my now defunct blog Wine Naturally back in 2012 and thought would be worth a re-run.

"I had a bad start to a wine tasting a few days ago. The first eight to ten wines I tried - all red - tasted unforgiving and mean with unusually high acidity and edgy tannins. As the tasting was the Wine Society’s, whose wines I generally admire, I wondered whether the fault was mine, not theirs.

I had started the tasting unusually early just before it opened at 10am. The wines were a little cold - most had just been opened and the room was a chillier than usual 18°C. I’d been travelling for two days and hadn’t slept brilliantly the night before. I had a claggy throat that was threatening to turn into a cold. It was a leaf day. It could have been any one of those things.

I went back at the end of the tasting and re-tasted the wines, slightly warmer now, with less in the bottle and found them more giving in a couple of instances but not a great deal changed in others. I then went on to another short tasting with a chef - in a slightly warmer room - where the wines seemed to show more character. So maybe it was room temperature. Or a more relaxed congenial atmosphere? Who knows?

It got me thinking about other factors that might affect the way you taste:

How long the wine has been opened and whether it’s been decanted
Some producers even reckon their wines are better opened the previous day. Three of the wines at the Wine Society had been decanted ‘to get rid of sediment’. That would have also opened them up.

How many wines you’ve tasted beforehand
At supermarket tastings you’re often faced with 120 wines - sometimes more. At wine competitions, twice or three times that. Even the best tasters must suffer from some degree of palate fatigue

What type of wine preceded the one you’re tasting
They should be placed in style order but often they’re grouped by country and price so you may taste an smooth, expensively made wine before a cheaper, lighter-bodied one. If you’re tasting wines of the same type - particularly young, high alcohol reds, it becomes more and more difficult to differentiate between them

Whether it’s a tank sample or a finished wine
Or if it’s a mass-produced wine which is bottled on demand, which batch you get and how well the wine is stored in transit

How familiar with or sympathetic you are to that particular style of wine
Where natural wines may fare badly in a line-up. And I have a problem, as admitted in the blog, with soupy reds.

How long since you’ve eaten and how much
Most people say they taste better in the morning - I certainly find it hard to taste well after anything other than a light lunch. How strongly flavoured and/or spicy the food you eat will also make a difference.

How well - or badly - you’ve slept
A noisy room, an unfamiliar bed, too much food or drink the night before, a pressing deadline can all affect how well you sleep. As can . . .

What temperature the room is and whether it’s air-conditioned
See my initial remarks. I think the air conditioning is the more significant factor here. I rarely have any problems tasting in a wine cellar at 18°C

The weather
Not so much a question of whether it’s wet or sunny but of the atmospheric pressure. Very much more competently explored than I could by The Wine Doctor, Chris Kissack though unfortunately I can't now find the link.

The biodynamic calendar
A more controversial one. I didn’t know it was a leaf day before the tasting. I checked (the app When Wine Tastes Best is useful) when I’d got through my first 10 wines. Sometimes it doesn’t seem to make a blind bit of difference - a wine tastes disappointing, I find it’s a fruit day. Hard to prove either way.

The pyschological state of the taster
Relaxed or tense and stressed?

Industry professionals such as MWs will no doubt tell me that if you follow an accepted tasting protocol in your assessments that these variations are marginal but I’m not sure. They’re not superhuman. They worry about their kids. They feel liverish just like the rest of us. Inevitably how we feel must affect the way we engage with a wine.

I remember the late Gerard Basset before the World’s Best Sommelier awards in Chile a couple of years ago barely eating anything, terrified that something might affect his palate or, worse still, upset his stomach.

The implication of course is that you should try and taste wines at least twice before scoring or pronouncing on them - something I try to do but which is not always possible given the tight deadlines we all work to.

Maybe we all need to be a bit more mindful though as I argued in this post.

Food for thought, anyway. What do you think?

Photo by K.Decha at shutterstock.com

Fascinating,practical and spot on advice for wine tastings!