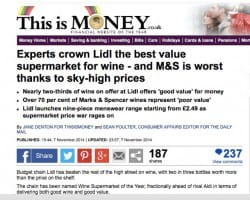 Is Wotwine the UKIP of the wine world?

The news that an organisation called Wotwine has nominated Lidl their supermarket of the year - and M & S the worst for value - inevitably hit the headlines this week. There’s nothing the tabloid press likes better than a story claiming that wine is overpriced.

My initial reaction was to dismiss it as an attention-grabbing publicity stunt from a headline-seeking startup but the story is a bit more complicated than that. The tasting panel includes a number of of Masters of Wine and sommeliers and even a winemaker. They meet weekly to taste a certain category of wine - say Chablis or Malbec - from all the major supermarkets and give the ‘would pay’ price they think they’re worth. You then evaluate if what the supermarket is charging for them is fair. They buy all the wine they taste (for which brownie points) but I wonder who pays for it? According to one of the regular panel, Nayan Gowda, it's funded "by a group of private individuals". With deep pockets, presumably.

It’s a clever anti-establishment idea which arguably has more merit than wine competitions where companies pay to enter wines and can therefore pick the stock they choose to submit. (Supermarket wines could have been languishing on the shelf in less than ideal conditions) It’s ideal for people who buy the same wine regularly and simply buy it on price.

But isn’t wine a little bit more complicated - and rewarding - than that? Unless we're on a particularly tight budget we don’t buy our food simply on price. Do you want to know where you can buy the best value chicken? I suspect you don’t. You want to know where it comes from and how it’s been treated. Some of us want someone to talk to about that, hence the survival of butchers - and in the case of wine, local wine merchants. Naked Wines - whatever you think of them - has shown there’s a huge appeal in selling wines with a story behind them, not necessarily at the cheapest price.

And what of more adventurous wine drinkers - a minority but a growing one. Does the team tackle wines like the Txakoli I was raving about the other day for example? Or orange wines (one of the more commendably off-piste wines in Wotwine's much maligned M & S)? Or natural wines - on which I’m sure most MWs would disagree. Isn’t it right that a winemaker who takes inordinate time and care cultivating his vineyards, hand-harvesting his grapes and ageing them in just the right kind of barrels shouldn’t charge more for them? Wine is not just about price. 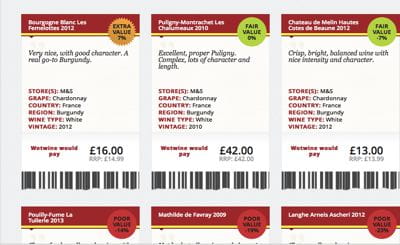 The actual experience of using wotwine also doesn't quite stack up to the headlines. I did a random search on the site for white wines from M & S and got a selection that included a "real go-to" burgundy (their words) they valued at £16 for which M & S was only charging £14.99, an "excellent, proper" £42 Puligny Montrachet they also valued at £42 (value?) and a "crisp, bright, balanced" Hautes Côtes de Beaune "with nice intensity and character" they valued at £13 and for which M & S was charging £13.99. Hardly a rip-off.

So a few years on and the new entrants of ALDI and LIDL are well established and gaining market share in the food sector. Both have become impressive for the value they offer, not just in budget items. Indeed Lidl have been crowned Wotwine Wine Retailer of the year for the third time in a row.
Although there are some encouraging signs of improvement in quality and value across the retail trade, there is still some way to go. Only the top three retailers, Lidl, Aldi and Asda had more Good Value and Fair Value wines that Poor Value, with Wotwine still rating over half of all wines it tasted as Poor Value. That’s disappointing. We recognise that retailers have different pricing strategies but it’s rather stark that although M&S ranks equal top for quality, only 27% of its wines were rated Good Value or Fair Value. We’ve been saying consistently that M&S has an excellent range of wine but it just charges £1-2 per bottle too much.
Check out Wotwine for the full results of the 2019 Wine Retailer of the Year Awards.

I think M&S Wines are really under rated; like you say Fiona, there is an impressive selection of off-piste wines and one of the pleasures of wine is discovering something new. I guess it is all about the price consistently for some and not always for others. Great article anyway& Wotwine sounds are interesting concept regardless.

Interesting article. I do feel it is very early days to judge Lidl and Aldi. I cannot comment on Aldi but I do have some experience with Lidl. They have put their money where there mouth is and completely revamped their wine offering - the focus on fine wine particularly from Bordeaux. But this is only very recent (6 weeks) and based on what I've seen in store it is very early days. They have stock mismatches, poor and confusing display.. Yesterday in my local store they had five different Saint-Emilion Grand Cru's - two 2011, two 2012, one 2006 with prices ranging from £9.99 to £21.99 - confusion reigned as some of this wine was bundled together by the year (not by maker). And no Muscadet, Chablis, Graves..I wish Lidl well and do hope they succeed, but my experience in-store would suggest it is 'too soon to say'.

Our aim is to be a totally impartial help for consumers to find good value in Supermarkets which is where most people shop. Clearly for the wine lover price isn't everything, (I still love Krug at £100 plus a bottle), but we feel the consumer needs help. We like what M&S are doing sometimes, indeed 12% of their wines we rate as exceptional value, and 12% very fair value, but they are inconsistent.
Call me and come to some of our tastings, so you can judge for yourself some of the surprising things we find.