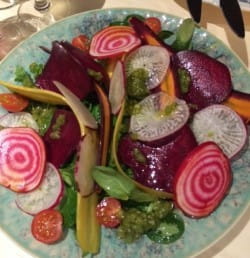 The restaurants about which there is the greatest buzz have a number of things in common. They serve vegetables - lots of them. They are often staffed by foreign chefs, particularly Japanese, and front of house staff who are - almost unheard of in Paris at one time - polite and solicitous. And they serve natural wine which - please note, sneerling sceptics in the wine trade - their largely young clientele totally takes in its stride.

Le Fooding - the new bible for on-trend foodies loves them, singling out places like Le Servan, Les Déserteurs and Clown Bar for their ‘palmares’ or accolades of the year. 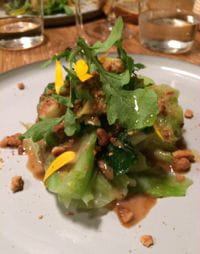 The interesting thing is that it’s vegetables that make the economics of this new generation of restaurants viable. Last night I returned to Les Déserteurs, a restaurant we’d greatly enjoyed on a flying visit to Paris back in October. The restaurant is tiny - just over 20 covers, I’m guessing - so there is just one, no-choice fixed price menu from which you can take 4 courses for 45€ or 6 for 60€. The only expensive ingredient on it last night was grouse but they’re only serving half a bird a person (the breast with the leg elegantly turned into a perfectly seasoned ‘caillette’ (faggot). The first course was based on hispi cabbage (right) the second on assorted root veg and the final one - an immaculate tarte tatin - on apples. I’d be surprised if the cost of the ingredients was more than 12€.

That is not a complaint. The ingredients were handled with consummate skill using contrasting tastes, colours and textures to create a meal that was every bit as satisfying as one containing ingredients twice the price.

The food is backed up by an excellent and imaginative wine list that you feel is driven by a desire to serve wines that are truly interesting rather than ones on which they could make the greatest profit margin. 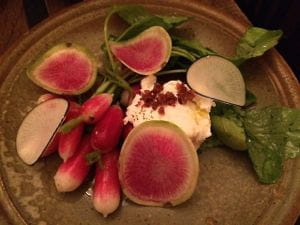 Other restaurants - on which I’ll be reporting at the end of the week - follow a similar pattern - or, like Au Passage, adopt the popular small plates formula which, given that prices here include service, makes for affordable eating for the customer too.

Alain Passard tried some 10 years ago to base his restaurant on vegetables. He was before his time but what he attempted to do - and is now doing with renewed success - is mainstream these days. Maybe we should call this new phenomenon Passardisme?